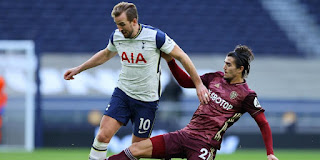 The Tottenham team, under the leadership of its coach Ryan Mason, is preparing to be a heavy guest in the Leeds United team, led by Argentine coach Marcelo Bielsa, where the two teams face in the 35th week of the Premier League competition, and a match will be held at the Island Road stadium hosted by Leeds, which we will talk about in detail below .

Date and channels for the Tottenham match against Leeds United

⚽ End of the match: Leeds United VS Tottenham

Tottenham is currently ranked sixth in the Premier League table with a score of 56 points. So far, the Spurs have played 34 games with "16 wins - 8 draws - 10 defeats", and Tottenham's players scored 60 goals, while they conceded 38 goals.

On the other hand, Leeds United comes in eleventh place with 47 points, as the coach Bielsa's squad played 34 games, with "14 wins - 5 draws - 15 defeats", and Leeds players scored 50 goals, while their goal was scored by 52 goals.