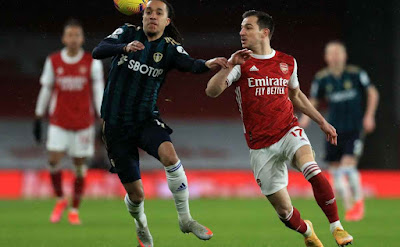 ⭕ Arsenal XI: Leno; Cédric, Holding, White, Kolasinac; Maitland-Niles, Elneny, Smit Rowe; Martinelli, Nketiah, Pépé
⭕  Leeds XI: Meslier; Drameh, Llorente, Struijk, Dallas; Phillips, Forshaw; Roberts, James, Harrison; Rodrigo.
Arsenal will face Leeds at the Emirates Stadium for the 2021/22 EFL Cup last 16 matches, Wednesday (27/10/2021) at 12:15 midnight Indian time.
Arsenal qualified for the round of 16 after eliminating AFC Wimbledon in the previous round with a 3-0 score through goals from Alexandre Lacazette, Emile Smith Rowe, and Edward Nketiah.
Meanwhile, Leeds qualified for the round of 16 after getting rid of Fulham in the previous round with a score of 6-5 through a penalty shootout.
Arsenal is in very good shape ahead of this match. Last weekend, Arsenal was able to beat Aston Villa with a score of 3-1 in the Premier League through goals from Thomas Partey, Pierre Emerick-Aubameyang, and Smith Rowe. The victory made the  Gunners without defeat in their last 7 matches (W5 D2 L0).
On the other hand, Leeds has been in poor form lately. Last weekend, Leeds was only able to pick a 1-1 draw against Wolverhampton Wanderers in the Premier League. The result made Leeds only win 1 win in the last 4 matches (W1 D1 L2).
At the last meeting in the English Premier League last season, Arsenal was able to beat Leeds with a score of 4-2 at the Emirates Stadium. Arsenal took a 4-goal lead through  Aubameyang's hat-trick in the 13th, 41st, and 47th minutes, and Hector Bellerin's goal in the 45th minute. Meanwhile, Leeds could only reduce the position through goals from Pascal Struijk in the 58th minute and Helder Costa in the 69th minute.
Point Table