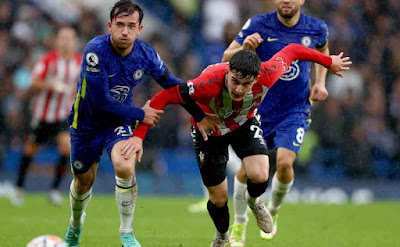 ⭕ Not published Yet.
Chelsea will face Tottenham at Stamford Bridge for the 2021/22 EFL Cup last 16, Wednesday (27/10/2021) at 12:15 midnight Indian time.
Chelsea advanced to this round after getting rid of Aston Villa in the previous round with a score of 4-3 on penalties.
Meanwhile, Soton advanced to this round after eliminating Sheffield United in the previous round with a score of 4-2 also through a penalty shootout.
Chelsea is in very good shape ahead of this match. Last weekend, the  Blues were able to overthrow Norwich City with a landslide score of 7-0 in the Premier League through a Mason Mount hat-trick, and one goal each from Callum Hudson-Odoi, Reece James, Ben Chilwell, and an own Max Aarons. The victory became Chelsea's victory in 4 matches in a row (W4 D0 L0).
On the other hand, Soton is also in a bad condition ahead of this match. Last weekend, Soton was only able to get 1 point after a 2-2 draw against Burnley in the Premier League. The result made  The Saints only win 1 win in the last 4 matches (W1 D1 L2).
Chelsea and Soton have met once this season, namely in the 7th match week of the English Premier League on 2 October which took place at Stamford Bridge. In that match, Chelsea was able to beat Soton with a landslide score of 3-1.
Chelsea opened the scoring first through Trevoh Chalobah's goal in the 9th minute. Soton had equalized in the 61st minute through James Ward-Prowse's goal. However, Chelsea was finally able to lock in the victory through two goals, each scored by Timo Werner in the 84th minute and Ben Chilwell in the 89th minute.
Point Table