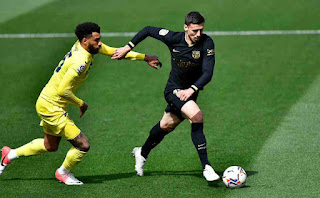 Advertisement
Advertisement
⭕ Match Preview
Prediction of Villarreal vs Barcelona, ​​All eyes will be on the Estadio de la Ceramica when Villarreal and Barcelona face each other in the 15th round of La Liga.
Yellow Submarine shared the spoils with Celta Vigo in their last league outing, with the team remaining at the bottom of the table.
Key striker Gerard Moreno remains in the recovery room, and, in his absence, Senegal international Boulaye He should continue to lead the way for the home side.
Barca, on the other hand, are aiming to build on a hard-fought 1-0 win over their local rivals Espanyol. New boss Xavi marked his debut with a win, but his men will have a much bigger fish to fry against Villarreal.
As Unai Emery's men are hard to beat at home, we are tempted to draw. All Sergi Roberto, Pedri, Ansu Fati, Martin Braithwaite and Moussa Wague have been ruled out through injury, while Sergio Aguero has retired from football due to a heart problem.
Villarreal will be looking to improve on their recent form here after losing 2-0 in the Champions League in their previous outing against Manchester United.
In that match, Villarreal managed to control 51% possession and 13 shots on goal with 3 on target. Manchester United have 11 shots on goal with 6 of them on target. Cristiano Ronaldo (78′) and Jadon Sancho (90′) scored goals for Manchester United.
Under three goals per game seen in 5 of the last 6 matches in which Villarreal took part. With regard to goal attribution in this period, their opponents scored 8 on aggregate while Villarreal registered 7 goals.
Previously, Barcelona drew 0-0 in the Champions League with Benfica.
In that match, Barcelona controlled 65% of the ball possession and 14 attempts on goal with 3 of them on target. For their opponents, Benfica got 6 shots into the net with 2 of them right on target.
In 5 of the previous 6 matches featuring Barcelona, ​​very few goals have been scored between them and the opposing team. The overall average number of goals per game in that spell was just 1.83, with the average number of goals scored by Barça being 1. It will be interesting to see if that trend will be maintained into the next matches or not.
A look at the previous head to head results up to 12/2/2018 reveals that this match has been a source of sadness for Villarreal. They haven't managed to register any wins while Barcelona have been too good for them, running out of winners in 83 per cent of those games.
Many goals were also scored during this period, 25 overall with an average of 4.17 goals per game.
The last league clash featuring these clubs was a La Liga match day 32 on 25/04/2021 when the final score was Villarreal 1-2 Barcelona.
At that time, Villarreal had 43% possession and 10 attempts on goal with 4 of them on target. Their only player to score is Samuel Chukwueze (26′).
On the other hand, Barcelona got 15 attempts on goal with 5 on target. Antoine Griezmann (28′, 35′) scored.
The referee was Carlos Del Cerro Grande.
Villarreal boss Unai Emery would love to have no fitness issues at all ahead of this clash thanks to a completely injury-free group at the ready.
With a completely healthy squad available to choose from, Barcelona boss Xavi Hernández has no fitness concerns to speak of before this game.
We have a feeling that Barcelona and Villarreal might both score goals, with a bit between these two teams.
We have a feeling that Barcelona and Villarreal might both score goals, with a bit between these two teams.
It seems that a draw may be on the cards. Having said that, we saw a tight encounter with a 1-1 draw after 90 minutes.
Villarreal vs Barcelona Score Prediction: 1-1
#KR