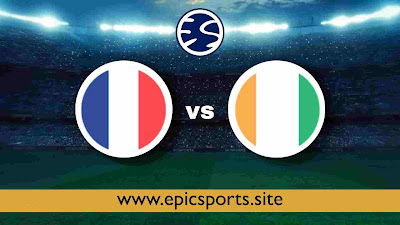 The hosts have not been in action since beating Finland 2-0 in a 2022 World Cup qualifier last November, but Ivory Coast featured two months ago at the Africa Cup of Nations, reaching the last 16 before losing to finalists Egypt on penalties. .
France barely had to sweat during their 2022 World Cup qualifying campaign, picking up 18 points from their eight games to finish comfortably top of Group D, and they are the reigning world champions, having lifted the trophy for the second time in 2018.
There is no doubt that the Blues will be among the favorites to enjoy more success in this year's competition, and they will be desperate to bounce back from a disappointing European Championship, which saw them lose in the last 16 of the competition. Switzerland.


Didier Deschamps' side have also enjoyed recent success in the UEFA Nations League, beating Belgium and Spain in the semi-finals and final towards the end of last year, and the national team will return to action in the same competition in early June, facing Denmark in the opening round. they.
France will be looking ahead to the World Cup, and Deschamps will look to the next two friendlies against Ivory Coast and South Africa as valuable fixtures, with a number of players looking to impress to secure their place in the squad for the competition. in Qatar.
Les Bleus, as mentioned, are on a five-game winning streak in all competitions going into this clash, while they are unbeaten since losing on penalties to Switzerland at Euro 2020; the world champions have also won their last two friendlies, both 3-0, against Wales and Bulgaria.
Ivory Coast performed poorly at the Africa Cup of Nations earlier this year given their talent, reaching only the last 16 of the competition, with Egypt beating them 5-4 on penalties after a goalless draw.

The Elephants competed in the group stage of the 2006 World Cups, 2010 and 2014, but they failed to qualify for the 2018 edition of the tournament and will also not be in this year's competition, finishing second in their qualifying group behind Cameroon.
Ivory Coast will face France and England in their two friendlies in March, and there is plenty to gain for Patrice Beaumelle's side, as two positive results will put them in a confident mood going forward.
There will also be plenty of familiar names on display for the visitors over the next two games, and they will more than be able to match France on Friday, with the likes of Serge Aurier, Eric Bailly, Franck Kessie, Nicolas Pepe, Wilfried Zaha and Sebastien Haller all in the squad.
Ivory Coast have not played a friendly since drawing 0-0 with Ghana last June, but they have lost just one of their last six non-competitive matches, including wins over Tunisia, Congo DR and Burkina Faso.
Benjamin Pavard was forced to withdraw from the France squad after testing positive for the coronavirus, while N'Golo Kante is a doubt, having recently left the camp for personal reasons.
Lucas Digne is also a doubt due to injury, so Theo Hernandez could play at left-back, while Jules Kunde may feature at right-back for the world champions here.
Jonathan Clauss, William Saliba and Christopher Nkunku will hope to earn their first caps on Friday, while Olivier Giroud returns to the squad, and the 35-year-old could benefit from Karim Benzema's injury-related absence to feature alongside Kylian Mbappe and Antoine Griezmann in the squad. attack line.
Adrien Rabiot and Aurelien Tchouameni, meanwhile, are on course for a midfield spot alongside Paul Pogba, with a decision on Kante's involvement not expected to come until the last minute.
As for Ivory Coast, Aurier, Bailly, Pepe, Kessie and Haller should all start, while Max Gradel, who is the most experienced member of the squad at this level, is also likely to feature in the starting XI.
There are not many surprises in the away line-up here, with Jean Michael Seri set to feature alongside Ibrahim Sangare in midfield. Zaha is likely to start on the bench, with Pepe, Kessie and Gradel set to back Haller, who has scored four goals in 12 appearances for his country.
Mohamed Kone, Ismael Diallo and Paul Akouokou, meanwhile, will all be hoping to make their international debuts for Ivory Coast over the next two games.
Preview of France vs Ivory Coast
France: Lloris; Kounde, Varane, L Hernandez, T Hernandez; Rabiot, Tchouameni, Pogba; Griezmann; Giroud, Mbappe
Ivory Coast : B Sangare; Aurier, Bailly, Deli, Konan; I Sangare, Series; Pepe, Kessie, Gradel; Haller
Score Prediction France vs Ivory Coast: 3-1