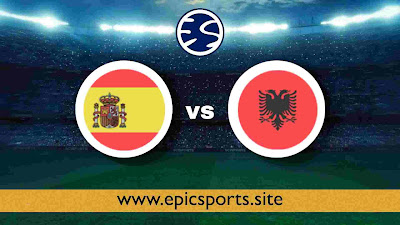 Spain | WWWLWW
Spain are hoping to win again following the 1-0 WC Qualifiers - Europe victory vs Sweden.
In that game, Spain had 72% possession and 12 attempts on goal with 4 on target. The only player to score for Spain was Álvaro Morata (86'). At the other end, Sweden had 7 attempts at goal with 0 of them on target.
Spain haven’t been able to stop scoring goals, netting in each and every one of their last 6 matches.
They have managed to rack up 11 during that period and have conceded a total of 3. It will be interesting to see if that trend can be sustained here.


Albania | WWWLLW
Albania head into the meeting following on from a 1-0 WC Qualifiers - Europe win vs Andorra in their last fixture.
In that game, Albania had 75% possession and 19 shots at goal with 6 on target. The only player to score for Albania was Endri Çekiçi (73'). Andorra had 8 shots on goal with 3 of them on target.
A tendency of at least one team drawing a blank in games involving Albania has become evident of late. Checking on their last six outings shows that this has occurred 6 times. In these clashes, their opponents have hit a goal tally of 6 while Albania have scored 8.
Head to head
The last league fixture featuring the two was WC Qualifiers - Europe match day 9 on 06/10/2017 which ended up with the score at Spain 3-0 Albania.
That day, Spain managed 64% possession and 28 attempts on goal with 6 of them on target. The goalscorers were Rodrigo Moreno (16'), Isco (23') and Thiago Alcântara (26').
For their opponents, Albania got 14 attempts on goal with 2 of them on target.
The referee was Aleksei Eskov.