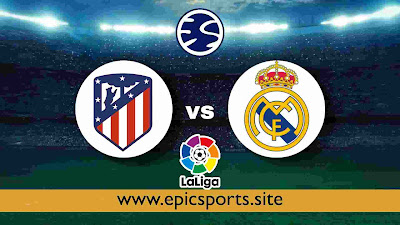 advertisement
🇪🇸 Atletico XI: Oblak; Vrsaljko, Savic, Giménez, Reinildo; Marcos Llorente, Koke, Kondogbia, Carrasco; Correa, Cunha
🇪🇸 Real Madrid XI: Lunin; Lucas Vázquez, Vallejo, Militao, Nacho; Camavinga, Casemiro, Kroos; Rodrygo, Mariano Díaz, Asensio
🔴 FT : Atletico Madrid | 1 - 0 | Real Madrid
40' | 1 - 0 | Yannick Carrasco (pen.)
Atlético Madrid | LLDWDL
Atlético Madrid will be looking to improve on their last outing here after the 2-0 La Liga loss in their previous game against Athletic Bilbao.
In that game, Atlético Madrid managed 57% possession and 9 attempts at goal with 3 on target. The scorer for Atlético Madrid was Mario Hermoso (8' Own goal). Athletic Bilbao got 11 shots on goal with 4 of them on target. Iñaki Williams (56') scored for Athletic Bilbao.
A common characteristic of more recent Atlético Madrid games is seeing a zero in the scoreline.
From their prior 6 clashes leading up to this one, in 5 of them a wager on BTTS would've been a losing one.
Looking at the pre-match facts, Atlético Madrid:
have not beaten Real Madrid in their previous 11 matches in the league.
are undefeated in their previous 5 league matches at home.
Real Madrid | LWWLWW
Real Madrid come into this match after a 3-1 Champions League win over Manchester City in their last game.
In that game, Real Madrid had 45% possession and 14 attempts at goal with 5 of them on target. For Real Madrid, the goalscorers were Rodrygo Goes (90', 91') and Karim Benzema (95'). On the other side, Manchester City got 15 shots at goal with 10 on target. Riyad Mahrez (73') was the scorer for Manchester City. Real Madrid ran out winners in extra time.
A very clinical Real Madrid have enjoyed getting themselves an absolute glut of goals over their last 6 clashes (18 in all). That means that they have an outstanding mean average of 3 goals scored per match over this period of time. That sort of pattern isn’t assured to be carried forward into this match, of course.
Leading up to this clash, Real Madrid:
have not beaten Atlético Madrid in away games against them for the last 2 league games.
haven't been defeated by Atlético Madrid when they've played them away from home in the last 6 league games. Travelling fans have really enjoyed these clashes.
haven't been defeated in their previous 6 away league matches.
#KR
#EPICSPORTS