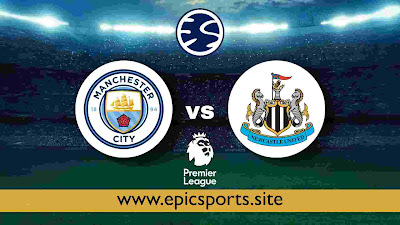 advertisement
🏴󠁧󠁢󠁥󠁮󠁧󠁿 Man City XI: Ederson; Cancelo, Rúben Dias, Laporte, Zinchenko; Gündogan, Rodri, De Bruyne; Sterling, Gabriel Jesús, Grealish
🏴󠁧󠁢󠁥󠁮󠁧󠁿 Newcastle XI: Dúbravka; Krafth, Lascelles, Burn, Targett; Longstaff, Guimarães; Almirón, Joelinton, Saint-Maximin; Wood
🔴 FT : Man City | 5 - 0 | Newcastle
19' | 1 - 0 | Raheem Sterling
38' | 2 - 0 | Aymeric Laporte
61' | 3 - 0 | Rodri
90' | 4 - 0 | Phil Foden
90+3' | 5 - 0 | Raheem Sterling
Manchester City | LWWWWL
Manchester City will be looking for an improved result here following the 3-1 Champions League loss in their previous game against Real Madrid.
In that game, Manchester City had 55% possession and 15 shots at goal with 10 of them on target. The only player on the scoresheet for Manchester City was Riyad Mahrez (73'). For their opponents, Real Madrid CF had 14 shots on goal with 5 of them on target. Rodrygo Goes (90', 91') and Karim Benzema (95') scored for Real Madrid. Real Madrid ran out winners in extra time.
Manchester City have been on a persistent run of goalscoring form, hitting the target every time they’ve gone out to play in their last 6 matches.
They’ve hit an aggregate of 19 during that time and have conceded a total of 10.
Looking at their past form shows that Manchester City:
are unbeaten in the league by Newcastle United in their last 5 games.
haven't been defeated in their previous 4 home league matches.
Newcastle United | LWWWWL
Following on from being defeated in their last game at the hands of Liverpool in Premier League competition, Newcastle United will be hoping to turn things around here.
In that game, Newcastle United managed 35% possession and 4 shots at goal with 2 on target. Liverpool got 24 attempts at goal with 10 on target. Naby Keïta (19') scored for Liverpool.
Eddie Howe's Newcastle United have turned their attacks into goals 8 times in the course of their most recent 6 matches. The aggregate of goals that they have conceded during those same matches comes to 7.
Ahead of this meeting, Newcastle United have not emerged victorious against Manchester City when they have played them away from home in the previous 17 league matches. Terrible.
#KR
#EPICSPORTS