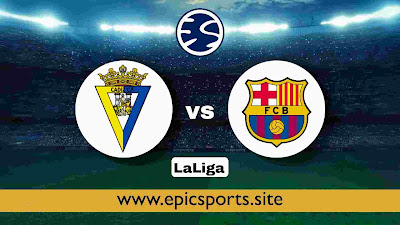 Cádiz | DWLLLL 📉
Cádiz will be hoping for a better result after a 3-0 La Liga defeat in their last game at the hands of Celta Vigo.
In that match, Cádiz had 42% possession and 7 attempts at goal with 0 on target. Celta Vigo had 9 shots on goal with 5 of them on target. Iago Aspas (56', 75') and Óscar (62') scored for Celta Vigo.
Cádiz have really been misfiring in recent times. Their ‘goals for’ figure equals just 2 vs opponents during the course of their previous 6 outings. In those meetings, Cádiz have also seen the tally of goals scored against them total 11.
Barcelona | LDWWWW 📈
Barcelona head into the meeting following on from a 5-1 Champions League win with the eclipse of Viktoria Plzeň in their last game.
In that game, Barcelona had 76% possession and 20 shots on goal with 11 of them on target. For Barcelona, the scorers were Franck Kessié (13'), Robert Lewandowski (34', 45', 67') and Ferrán Torres (71'). On the other side, Viktoria Plzeň had 8 attempts at goal with 1 of them on target. Jan Sýkora (44') scored for Viktoria Plzeň.
A succession of outstanding performances from the Barcelona defenders has resulted in their ‘goals against’ tally standing at 4 from their past 6 clashes combined. Over that same period, their own attack force has managed to score 16. That kind of pattern won’t necessarily follow through into this next game, of course..